I feel like I am beginning to make a bit of a reputation for myself as a bit of a crazy remnants lady (not that that bothers me at all, mind you); I really can’t seem to help it, however, as even when I’m not even rummaging waist-deep in a remnant bin, remnants just seem to find me. Case in point: I went to Spotlight a few weeks ago, with single goal and total focus – I needed more thread for Butterick 5882, and I was there to buy that AND ONLY THAT. But you can’t just go in and out of a fabric store; it would be positively rude not to at least look at all the glorious wonders on display. So there I was, minding my own business just having a good caress of some velvet (as you do), when I spotted it: a loose bit of burgundy stretch velvet, snuggled up amongst the other bolts – a remnant in the wild! Well, as far as I was concerned, it was a sign…so I bought it. Which leads me to my conclusion – some just have great remnants thrust upon them.

The question raised of course, is, what does one do with forty centimetres of stretch velvet? Something delightfully impractical, obviously – so I present to you my longline velvet and lace Boylston, with matching Grace panties and suspender belt!

Longline bras are a look I’ve been drawn to since I developed an interest in lingerie; they’re such an inherently elegant, sophisticated and classic look. But RTW ones had long disappointed me – I could never find them in the right size, and sister-sizing up, the issue of a too-large band was only exacerbated by the longer length. So as soon as I successfully began making my own underthings, a longline bra was an aspiration of mine. There aren’t all that many patterns out there for them; the Watson has a longline view (which I love!) but unstructured cups and no underwires, and Merckwaerdigh has some longline and bustier designs. But I decided fairly early on that the best course of action would be to alter a bra pattern with which I had already got a good fit. So when the Boylston proved to be such a hit with me, I knew the time had come. 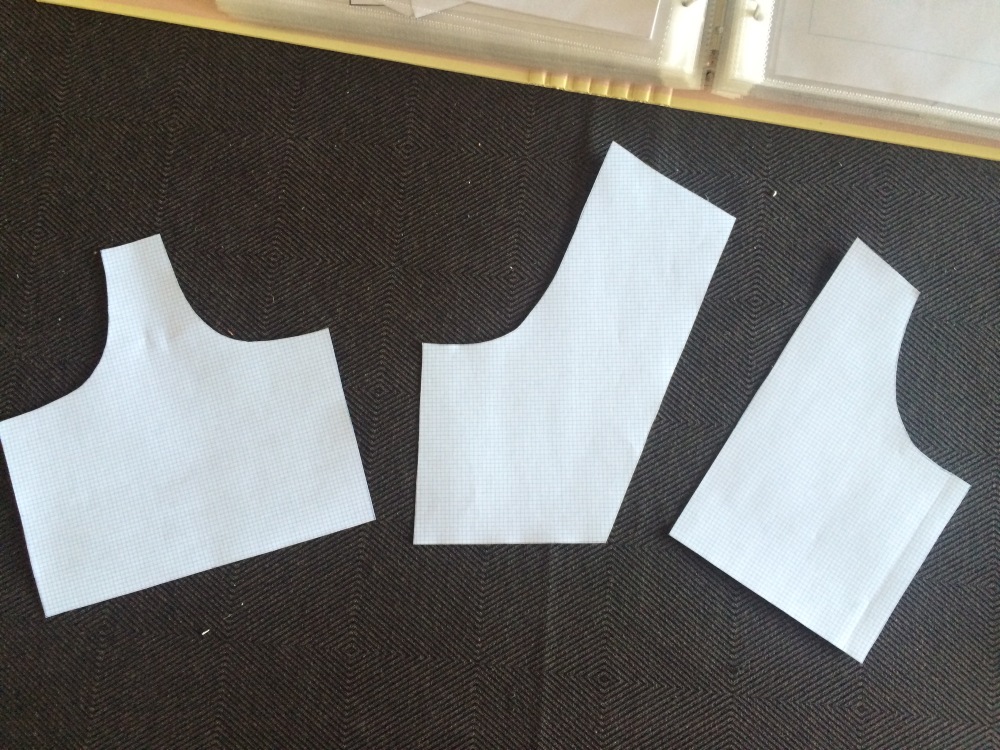 The three band pieces, altered for a longline look.

It’s not a difficult alteration, to turn a regular bra pattern into a longline; for anyone interested, Amy of Cloth Habit runs through the changes quickly in her bra-making sew-a-long. The main trick is work out at what angle to extend the lines – for example, your ribcage may not continue to narrow at the same rate below your normal bra line, so you might want to reduce the angle to prevent the bra from being uncomfortably tight around the bottom. I, on the other hand, have very narrow, tapered ribs, and so I decided to keep the angle the same and see how it turned out. My main decision was, how much to extend the pieces? I compared the pattern with the longline Watson band pieces, and decided on an extension of five centimetres. With that done, the fun could begin! 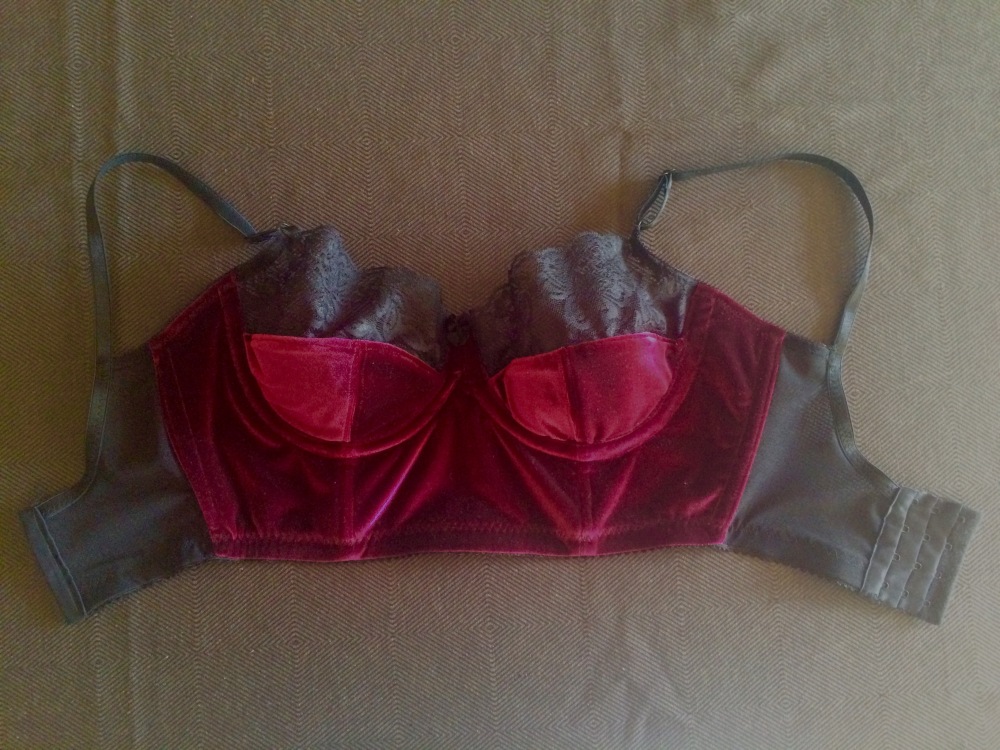 I’m pretty quick at churning out bras now; while I’m by no means an old hand, I’ve got the construction process pretty much down by now. However, this bra posed a number of challenges and took me about twice as long as usual. For one, the fabric choice; surprise surpise, stretch velvet is not the easiest thing to work with. Little bits of burgundy fuzz ended up everywhere, edges stretched by centimetres, and the nap meant that layers often got pushed out of alignment. I don’t think I’ve ever done so much unpicking on a bra! I also decided to use boning on the side seams and those under the cup, in order to keep it from riding up or buckling, so some extra time was need to add these in such a way that the ends were neatly covered by the elastics. Finally, I decided for the cups I wanted a lace upper and a foam lower, which also required some thought. I attached them with the lace sandwiched between the two lower layers. The effect isn’t bad, but if I’d thought to top-stitch the cross-cup seam and trim back before sewing the cups in, I might’ve reduced the bulk there. Oh well, we live and learn! 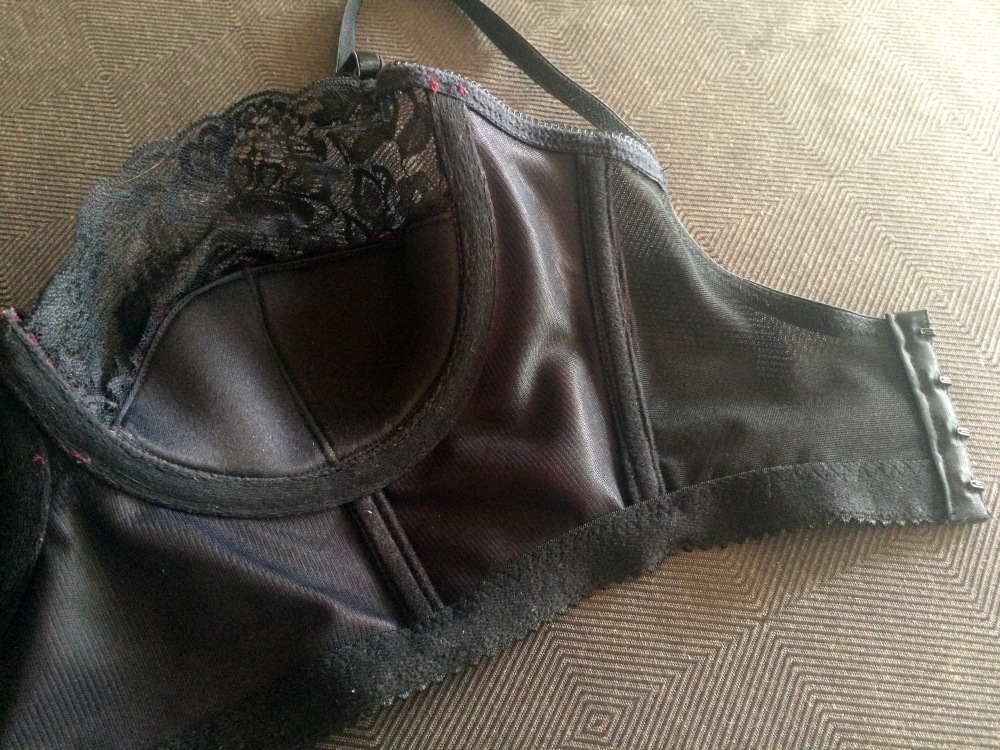 Now, how’s the fit? Pretty great! I made a good call on not changing the angle of the band seams; for me, the existing angle is just right (no wonder RTW longlines are such a disaster on me!). The cups are again, pretty great, and everything is snug and stays where it’s supposed to. The bridge didn’t seem to come out as narrow this time (I blame the velvet), but I might try narrowing it a smidge in the next iteration anyway, as I think there’s room for a tad more overlap in my wires. The wide band feels very supportive, but the back sits super low, which I love. These narrow 3/8 straps aren’t as comfortable as the lovely fabric straps on my last Boylston, but I do love the delicate look they give. The stretchy velvet unfortunately didn’t go in perfectly smoothly, so there are a few bits that pull when it’s on, but I don’t really mind too much. I was a bit unsure about the look of front boning initially (it looked like it was pulling on the band); in fact I tried removing it on one side to see if it looked any better without, but I hastily replaced it, as it was clearly doing its job of keeping the band flat and not buckled. So I’m happy to call this alteration a success, and look forward to a future with whole draws full of longline bras 😀 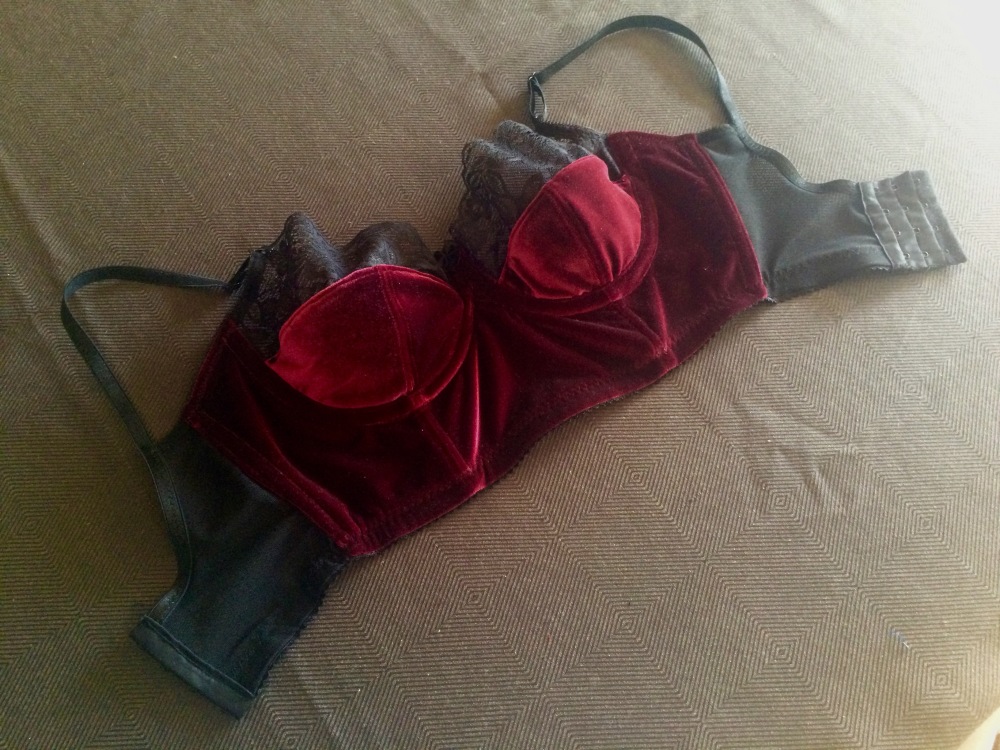 Not much to say about the accompanying undergarments – another pair of Graces and the same garter belt pattern I posted earlier this week. I decided to leave the lace off the underwear, as it’s rigid and I couldn’t think of a nice way to use it, but I put it in the front panel of the garter belt – which I think worked out best, as it now really stands out when they’re worn together 🙂 (and I am so proud of how well I mirrored the lace to use the scalloped edge in the front piece!) 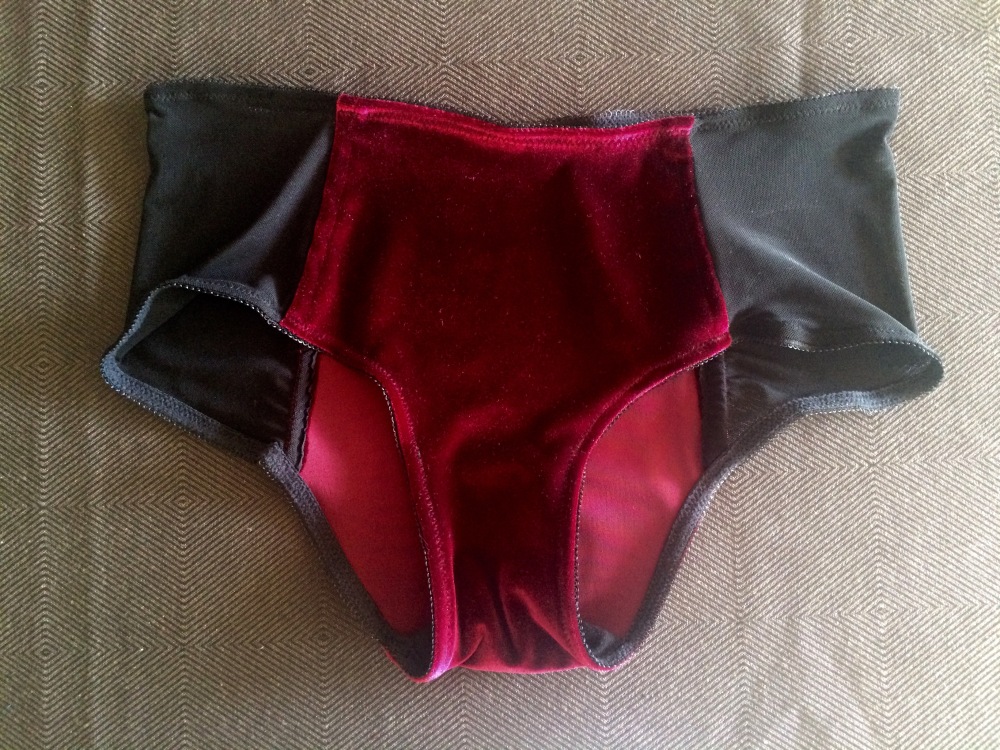 It’s been a very productive sewing week for me (helped by my dedicating five hours on Friday just to cutting) – since last week, I’ve made part of my sister’s theatre costume (which will be making an appearance here in a few weeks!), four pairs of underwear, two garter belts and now a longline bra! I’m very much at the pointy end of the year now though – so whilst I’m determined to maintain a weekly post, exams and assignments might well get in the way! Still, I’ll be on summer holidays again before long (I can hardly wait!) and I’ll be right into it again!